THE HEAVENLY MAN IN SAN DIEGO 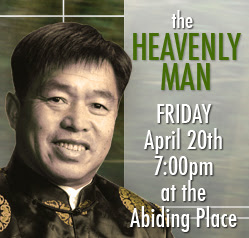 Brother Yun will be returning to San Diego on
Friday, April 20th at 7:00 pm - hosted by the Abiding Place.
Brother Yun has preached the gospel of Jesus throughout China. At the age of 17 he gave his life to Jesus Christ. The first year he was saved he won over 3,000 people to Jesus. He has been arrested over 30 times for preaching the gospel. He has spent more than 3,700 days in prison in which he was tortured daily.
The book "The Heavenly Man" is the true story of his life in China, it is a modern day book of Acts. Mark your calenders.You don't want to miss this event.
You can read more online about Brother Yun at the Back To Jerusalem web site.
Posted by Nirusen at 11:45 AM