"No amount of foundation or age-defying makeup can hide the ugliness verbalized by actress and Revlon spokeswoman Susan Sarandon against the leader of the Roman Catholic Church," said Tomeo, bestselling author of the new book Extreme Makeover. "Sarandon needs to apologize to the pope and the Catholic community at large for calling him a Nazi, not once but twice. This is over the top even for Sarandon -- who's not exactly known for her conservative views.

"Sadly, one has to wonder whether there truly will be an outcry beyond the many Catholics who are outraged... because of the media mania of today's culture," Tomeo said.

In Extreme Makeover's chapter "Media Mania and the Feminist Mistake," she writes, "We are slowly but surely being desensitized by the messages."

"The bottom line is that women -- Sarandon and many, many others -- have come to believe that it's necessary to be 'out there' in order to get attention," Tomeo said. "Our culture has been offering that and other toxic messages to women for so long that many in the mainstream don't even blink when they hear something as nasty as calling the successor to St. Peter a Nazi."

In Extreme Makeover, Tomeo challenges women to tune out the toxic messages and truly begin to embrace the truth about their human dignity.

(Editor’s Note: Tomeo’s Extreme Makeover: Women Transformed by Christ not Conformed to the Culture was published in October by Ignatius Press.) 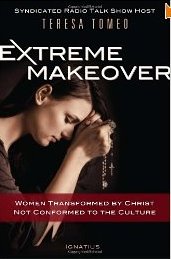 Extreme Makeover: Women Transformed by Christ, Not Conformed to the Culture [Hardcover]
Teresa Tomeo (Author)
Posted by Nirusen at 7:12 PM No comments: