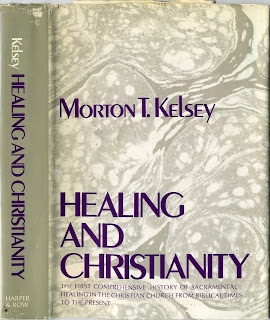 Health is one of the great fetishes of modern man. And yet perhaps one of the oldest forms of dealing with illness—the ministry of healing—has been buried in the twentieth century.

Mr. Kelsey believes that as civilization failed to fulfill man, he lost hope and belief in a loving God, and a wrathful God usurped his place. More and more the idea of man as a physical entity who could be healed only by physical means pre­vailed. Through the philosophies of Hobbes, Newton, Descartes, and Darwin, Kelsey traces the emergence of this view­point and its merging with theology.

But recent developments in modern psychological and scientific thinking re­veal that man's physical health is not trapped within nor is it wholly dependent on his physical being.

In HEALING AND CHRISTIANITY Mr. Kelsey seeks an understanding of Christian experience and theology in re­lation to psychological insights. Drawing upon the work of Carl Jung, he asserts that man's emotional health is indeed a strong influence on his physical state, but more importantly, man cannot be brought to emotional wholeness except when he has been touched by a real purpose outside of himself. Here is the bridge "through which we can see the influence of God and spiritual reality upon our bodies."

HEALING AND CHRISTIANITY is the first book to present a comprehensive history of healing in the Christian church from Biblical times to the present and combine it with the latest thought in medicine, psychology, and philosophy.

Morton Kelsey did his graduate study in philosophy at Princeton University and received his B.D. from the Episcopal Theological Seminary in Cambridge, Massachusetts. He continued his studies at the Claremont Colleges in California and the C. G. Jung Institute in Zurich. Mr. Kelsey is currently assistant professor at the University of Notre Dame where he recently concluded a seminar for pre-medical students on the subjects of death and suffering as well as seminars in the Program for Non-violence. He is also the author of DREAMS: THE DARK SPEECH OF THE SPIRIT; TONGUE SPEAKING: AN EXPERIMENT IN SPIRITUAL EXPERIENCE; and SEX: THOUGHTS FOR CONTEMPO­RARY CHRISTIANS.
Posted by Nirusen at 1:21 PM No comments:

Parents who believe in miracles 'torturing' dying children, doctors warn
The (London) Telegraph: Terminally ill children are subjected to needless suffering by parents who refuse to allow the withdrawal of treatment because of their religious beliefs, doctors claim.
Posted by Nirusen at 8:24 AM No comments:

TAKE A LOOK AT THE CHURCH

Major Christian Traditions:
Roman Catholic - The Roman Catholic Church denomination is the largest Christian group in the world today with more than a billion followers constituting about half of the world's Christian population.
Protestant - There are approximately 800 million Protestants in the world.
Orthodox - Approximately 260 million people worldwide are Orthodox Christians.
Pew Forum on Religion and Public Life (2011)
Pentecostals, Charismatics and Evangelicals:
Of the approximate 2 billion Christians in the world today, 279 million (12.8% of the world's Christian population) identify themselves as Pentecostals, 304 million (14%) are Charismatics, and 285 million (13.1%) are Evangelicals, or Bible believing Christians. (These three categories are not mutually exclusive.)
Pew Forum on Religion and Public Life (2011)
Christianity in America:
Today in the U.S., about 79.5% of adults (247 million) identify themselves as Christian. In comparison, the next largest religions in America are Judaism and Islam. Combined they represent less than three percent of the United States population.
Pew Forum on Religion and Public Life (2011)
Posted by Nirusen at 1:59 PM 2 comments: