Jesus Is Not Our Elected Representative

The church is a hierarchy--in composition, character, and mission. Jesus is not our elected representative. He is King of King and Lord of Lords. 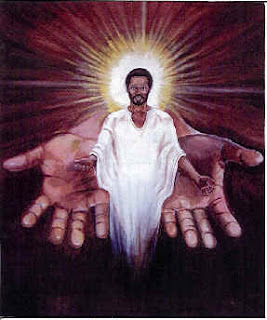 In a recent dust-up over liturgical colors, a colleague of mine was challenged on her decision to use purple instead of blue during Advent. Only in an Episcopal Church.
Of course, colors are never about color. And I am fairly sure that the parishioner who took her to task had concerns that go well beyond liturgical propriety. But the case that she made for using blue over purple was telling. "Purple is hierarchical," she complained.
Well, duh, yes it is. Kings, royalty, all that jazz. And, by the way, so are some shades of blue.
This slipstream of reasoning is pretty common of late. The word "egalitarian" is thrown around as an ecclesiastical ideal with ever-greater ease. And, arguably, there is a case to be made for an approach to leadership and church life that is as open-ended as possible, borrowing on the energy and imagination of those who enter the doors of our churches.
I am not a great fan of power that is used in a bullying, officious, abusive fashion. It's not for nothing that our dog Hilda is named after Hilda of Whitby a 7th-century abbess who was renowned for chewing on the bishops of her day. (We don't allow our dog to do that, by the way.)
But there are real problems with insisting that the church is not a hierarchy.
Not the least of them is this: The church is a hierarchy—in composition, character, and mission. Jesus is not our elected representative. He is King of Kings and Lord of Lords.
To ignore that fact flies in the face of a fundamental truth: God is God. We are not. To assert otherwise by changing colors and purging our language is not just a problem for our theology, it is a problem for ecclesiology as well. If God is not God, then there really isn't a good reason for doing church. People sense this, even if they can't name it, and it has subtly, but steadily eroded church attendance.
This does not mean that churches need to embrace caricatures of authoritarian leadership by barking orders and threatening excommunication. But it should not allow itself to be bullied into impotence by those caricatures either.
Biblical understandings of the fundamental and hierarchical difference between God and humankind do not focus on God's right to lord it over us, punish us, or drive us to despair. God is characterized instead as the One who is both capable of relationships and as One who longs for them. In this regard AkzoNobel's Tex Gunning, understands something about leadership that church leaders should have understood all along—and do, when they are at their best:
The quality of communal life of any kind depends upon the quality of the relationships within that community.
Understood in Christian categories, Gunning's observation is one with the way in which the purpose of Christ's life and ministry is described in John's Gospel: "that they may be one, as we are one."
This understanding of leadership is often missing from the approaches taken by ecclesiastical leaders who emphasize bureaucratic brinkmanship and programmatic glitz. And it may seem completely out of place in the corporate world. But, rightly, Gunning observes, people in any organization need to know that they are valued, respected, cared for, and safe. In churches, of course, relationships with God and with one another are in a sense, what it is all about.
A good friend of mine put his finger on this need not long ago. He observed, "You know, when I was young, I belonged to an intentional Christian community that really made a difference in my life. I felt needed and I needed the others who were a part of that community. I don't feel that way about church any more. Oh, I go—and I still think it's important to go. But worship is just something I go to watch happen. I don't feel any sense of connection to God or to the people with whom I attend church. After I've left, it doesn't matter any longer."
Of course it doesn't. We disassembled the hierarchy in the name of building relationships. Ironically, in its absence, there is no longer any reason to give those churchy relationships priority.
To argue that Jesus is one among many alternatives—or that church is among one of many civic organizations that are worthy of our attention—puts the church on a footing with other "good causes" that is alien to its original inspiration. The message of the Gospel is that the church is more than a good cause. To use a word that Gunning employs as well, it is the lifeline that restores our relationship with God and heals our relationships with one another.
That may sound hierarchical. But church is not a worthy activity. Life in the church is meant to be a one-of-a-kind commitment. And Jesus is not our elected representative. He is Lord of Lords and King of Kings. If we don't communicate that as ecclesiastical leaders, there are no programs or strategies that will serve as a substitute.

The Reverend Dr. Frederick W. Schmidt, Jr. is Director of Spiritual Formation and Associate Professor of Christian Spirituality at Southern Methodist University, Perkins School of Theology in Dallas, Texas. An Episcopal priest, he also serves as the director of the Episcopal studies program. He is the author of several books, including Conversations with Scripture: The Gospel of Luke (Morehouse, 2009) and What God Wants for Your Life (Harper One, 2005).
Schmidt's column, "The Spiritual Landscape," is published every Monday on the Progressive Christian portal. Subscribe via email or RSS.
Posted by Nirusen at 11:41 AM No comments:

Posted by Nirusen at 7:18 AM No comments: