Pastorgraphs: “A Time to Remember”


E-Vangel Newsletter
May 27, 2013
Pastorgraphs: “A Time to Remember”
On this Memorial Day, I am taking time to remember SSgt Ryan Coyer. No, I did not know him personally. I learned about him from the poignant photo that circulated on the web a few weeks ago showing his sister collapsed in grief at his grave in Arlington National Cemetery. I filed the photo away with the intent to revisit it on Memorial Day. It is a reminder that for every service man or woman who dies, there are dozens, if not hundreds, of family members and friends who bear the grief. So when we hear of the thousands who die in combat, we should multiply that at least ten fold, and that just begins to measure the magnitude of the grief, sorrow and loss. 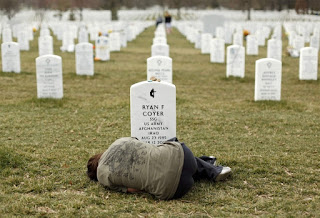 The picture, taken by Washington-based Reuters senior photographer Kevin Lamarque, first caught my eye because of the heart-wrenching grief it shows. Lesleigh Coyer, 26, traveled with her parents from their home in Michigan to visit her older brother’s grave. She was overcome with grief at the unspeakable loss of her only sibling. He died March 12, 2012 after tours of duty in Afghanistan and Iraq. He did not die in combat, but died suddenly stateside from cardiac arrest, complications of an injury of war. The family traveled to Arlington to mark the first anniversary of his death.
The second thing that caught my eye is the cross and flame at the top of the grave headstone, just above Ryan’s name. It is the emblem of The United Methodist Church. Of course, I would recognize that. I would like to think Ryan was a Methodist, but am proud when any our fallen servicemen and women and their families choose this beloved symbol. The cross reminds us of Jesus Christ’s sacrificial death so that we might have life, abundantly and eternally. The flame symbolizes the Holy Spirit who brings resurrection power to those experiencing God’s love.
Ryan was a proud member of the 75th Ranger Regiment, an elite branch of the U.S. Army known as the tan berets who carry out complex special operations.  Born in Nashville, TN, he grew up in Michigan. He was an honor roll student and played on his high school’s football team. He was 26 years old when he died. 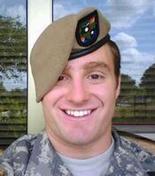 Just as I cannot feed all the hungry, clothe all the naked, visit all the sick and imprisoned, I can help one, or two, or a few. Today, I cannot remember all the heroes of all our wars, but I remember Ryan.
General Sherman said, “War is hell”. We should never forget those, like Ryan, who willingly serve and pay the ultimate sacrifice that freedom may endure to the ends of the earth. And we should never forget that every causality of war is someone’s child, sibling, parent, or best friend. As Lesleigh said of her brother, Ryan was her best friend, and is now her hero. For this time to remember, Ryan is my hero, too.
Well done, good and faithful servant.
With deepest gratitude, Pastor Bill
From the Quote Garden:
“Are they dead that yet speak louder than we can speak, and a more universal language?  Are they dead that yet act?  Are they dead that yet move upon society and inspire the people with nobler motives and more heroic patriotism?”
~ Henry Ward Beecher ~
Christ United Methodist Ministry Center
“Christ in the Heart of San Diego”
3295 Meade Avenue - San Diego, CA 92116 - (619) 284-9205