EL CAJON, Calif. — Last year, while Carol Garlow was sedated after a fifth hospital visit in four months due to complications from chemotherapy, the doctor told her pastor husband, Jim Garlow, that his wife was in renal failure and only had 6 weeks to live. 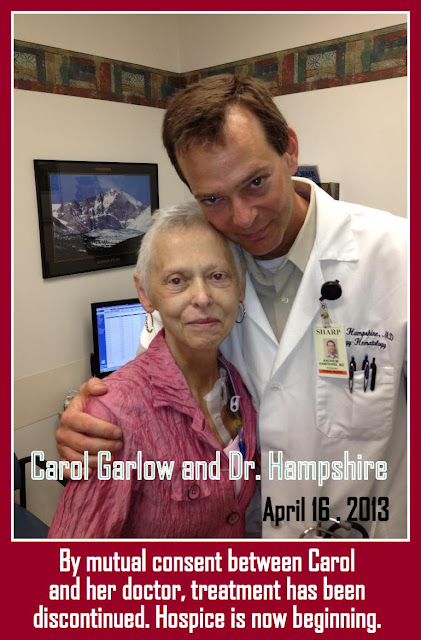 Garlow, pastor of Skyline Church in La Mesa, Calif., called in the troops: their immediate family, extended family and several close friends who had been their support system for her then five-year battle with ovarian cancer. They all gathered around her bedside awaiting the doctor to fill them in on what was next.

“I had no idea this was going on,” Carol Garlow said about the experience. “I had no idea what this doctor was telling my family. He felt like my body was shutting down, or beginning to. I came into the emergency room with some problems, but I didn’t feel like I was close to death,” she added, chuckling at the prognosis.

When she awoke in the mid afternoon, she was confused by the group that had gathered around her bedside and was wondering what was going on.

“All of a sudden they heard from me, ‘Did I miss something?’”

Later she learned that while she was under sedation her husband “just fell apart.”

“If I had been awake I could have fought them on it. ‘No I’m not. I am not dying. I have longer to live than [6 weeks]. I can feel it.’ You know, you can just feel it,” she said in a 90-minute exclusive interview from her El Cajon home where she continues to be treated for the cancer, which has since spread to her liver.

“The Lord hadn’t spoken to me and said, ‘Carol, you are on your last. I know that He will speak to me and He will say to me, ‘It’s time.’ I haven’t received that yet,” she said.

As has been her pattern since she was diagnosed in July 2007, Carol rallied after her treatment and by that evening was feeling much stronger.

“I was a totally different person than the person who came in the morning,” she said, proudly boasting that she was “ruining the doctor’s pronouncement that I only had [6 weeks] to live.”
“I’ve had these experiences where I’m just really down, I’m really sick, I’m having trouble, and all of a sudden I rise up and I’m strong again and I’m moving forward.”

The cycle has been repeated dozens of times and more frequently in recent months, prompting the family—for the first time ever—to discuss hospice. Just four days before her interview with the Christian Examiner, Carol spent an entire day rolled up in a ball, wracked with pain. She was non-responsive and unable to move around.

“We had a long, hard cry,” Jim Garlow confessed. “I gave her permission to stop fighting. We went through that day and then Monday she rises up and she is fighting again. She’s going for it.”

Read more at The Christian Examiner
Posted by Nirusen at 7:50 PM