IS THERE A DOCTOR WELBY IN THE HOUSE?

What kind of leader will Archbishop Welby be?

I will be commenting briefly on the prospects  , who starts his new job this week, on BBC Radio 5 Live 'Morning Reports' (5am onwards), on Premier Radio, and on news bulletins on 4 February 2013.

I say 'starts his new job'. This being the established church, Church of England PLC, things are a little more pompous and circumstancial than that, of course. 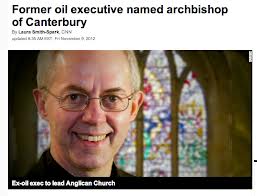 On 10 January 2013, the College of Canons met in the Chapter House of Canterbury Cathedral to elect Bishop Welby as the new Archbishop, having received the Congé d’Élire and Letter Missive from the Crown authorising the Election to take place. A further legal ceremony, the Confirmation of Election, takes place on 4 February at St Paul's Cathedral.

On 21 March, "after paying Homage to Her Majesty in his new role, his public ministry will inaugurated in a colourful ceremony at Canterbury Cathedral," Lambeth Palace reports. The obsequiousness of the whole thing reminds many of us why disestablishment would be so spiritually healthy for the Church.

All that said, the new head of the Church of England brings some interesting and varied experience with him. He has been a senior figure in a major company; he has expertise in banking and finance; he is well-equipped in the area of conflict resolution and transformation (skills which will be well used within the C of E, I am sure!), and he comes from the charismatic-evangelical wing of the Church -- which has not always been well represented in senior posts.

How does Archbishop Welby compare with the outgoing Archbishop, Rowan Williams? Well, he is not an academic or a public intellectual, and his style seems to be to get to the point rather more quickly than his predecessor. That said, he is obviously highly intelligent and articulate, and used to getting to the nub of complex issues quickly and efficiently. Those who have worked with him speak highly of his ability to do this in a quietly determined and humane way.

He comes from a different area of church tradition to Dr Williams, of course. But, albeit in an alternate register, he shares the same kind of open, prayerful and engaged approach to Christianity, it would seem. That is encouraging.

The main difference is that Archbishop Welby appears media savvy (http://www.ekklesia.co.uk/node/17351) as well as personable, and will bring the management, administrative and political skills that Dr Williams so evidently struggled with.

The two issues that are seen as most divisive within the Church of England at the moment are women bishops and same-sex marriage. The new Archbishop is a strong supporter of the former, and with his solidly evangelical credentials probably stands most chance of brokering a deal on one, either or both.
On marriage, he is conservative and (in the way that the term is popularly misused) a traditionalist. But he has said that he will talk to those who take a different, affirming stance on LGBT people within the Church, and unlike many opponents of same-sex marriage he does not wish those who think differently to him cast into the outer darkness. He has made a public comment about the unacceptability of homophobia. So hopefully there will be some positive, if difficult, talking to be done.

Former colleague Vivian Gibney commented on his diplomatic skills. "One of his main strengths is to find the way forward in negotiations… a solution that works for all sides. He is very good as seeing others' point of view."

What about economic issues, social justice and welfare reform? This will be an interesting one. Welby has been strong in his criticism of banks and financial institutions, and his calls for reform will be taken seriously because he knows what he is talking about. He is a member of the Parliamentary Commission on Banking Standards, which is looking into how to address the Libor rate-fixing scandal.

He comes from a free market background, but as the saying goes "it took Nixon to go to China". Someone from more conservative stock can sometimes push the boundaries further than a "bearded leftie". That could apply to matters both within and beyond the boundaries of the church institution. We'll see.

Likewise, the incoming Archbishop has advocated strongly for the poor and for social justice, albeit from a privileged position (which he understands). He recently spoke of his shock that children in some parts of the country are going without food. But his latest comments on the welfare state, if reported correctly, are more of a concern. The idea that the welfare system has had its day and that the church should step in begs all kinds of questions -- about welfare, about the church, about the Christian vocation, about charity and about justice.

Certainly, there are huge demographic, funding and organisational challenges to be faced in negotiating the future of welfare in these islands: but cuts, contracting out, de-layering, privatisation and withering statutory provision -- with the churches colluding naively in such processes -- is most definitely not the answer.

The poorest and most vulnerable should not have to depend on volunteers or what could end up being a piecemeal patchwork of care. It is not at all clear what Welby is thinking or proposing in this area, other than what looks like a certain questionable opportunism on the part of the church, but he would do well to reflect on St Augustine's remark that "charity is no substitute for justice witheld."

I also hope Justin Welby will remember that, among his august predecessors, Archbishop William Temple became one of the architects of the welfare state -- precisely because a previous model of care based on the beneficence of the church and the privileged proved neither adequate, nor just, nor Christian, he recognised. My colleague Bernadette Meaden has commented further on this topic (http://www.ekklesia.co.uk/node/17920).

On structural reform of the Church of England, the new incumbent could be quite radical in reshaping what have become self-preserving and lumbering bureaucracies at Lambeth Palace and Church House, the twin HQs. He has described his managerial and organisational approach as 'holy anarchism', which could make for an interesting culture clash or two.

My overall feeling? I think Justin Welby is a good man, and I am hopeful that his unusual blend of attributes will help the beleaguered Church of England to steer a path through some more choppy waters. Like others, I'm sure I will both agree and disagree (sometimes strongly) with him. But hopefully the agreeing and disagreeing can be fruitful, and his style will enable fresh pathways to be perceived. He needs support, time and prayer for what is about to land on his table, that is for sure.
* More on Justin Welby from Ekklesia: http://www.ekklesia.co.uk/justinwelby